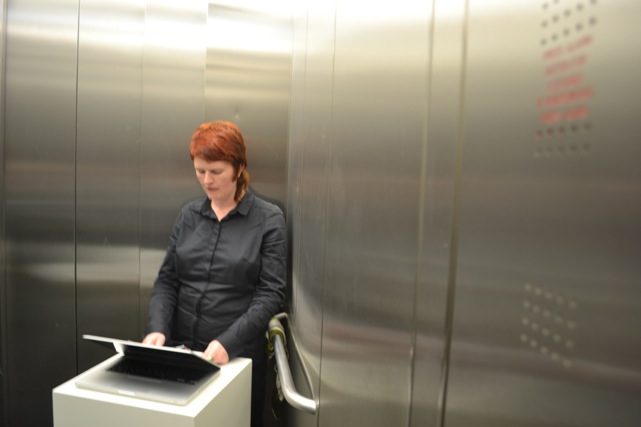 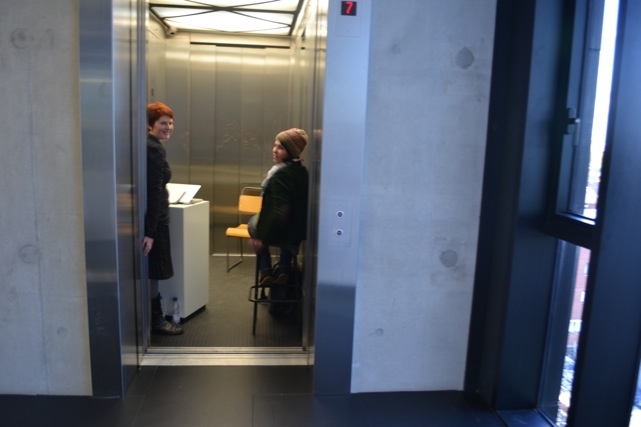 The standard seminar room and Powerpoint presentation format characteristic of this assessed MA unit was rejected in favour of the less conventional but more context appropriate lift setting. I arranged to meet tutors and peers in the ground floor foyer, electing to keep the location unannounced until that point.

The presentation was repeated after the assessment with the lift going up and down with people coming in and out.

The note to self pause look up inhale exhale in the following transcript informed the Soft Joint project work on the outdoor hoardings and in the breakthrough space at Manchester Metropolitan University, followed by research and development of proposed and accepted project for Coventry Artspace’s City Arcadia. (https://wordpress.com/post/jackiehaynesartwork.wordpress.com/910)

Good afternoon, my name is Jackie Haynes and I am studying for an MA in Textiles.

Thank you for coming to my Contexts Presentation.

In order for this presentation to be able to take place in this lift, I had to clear it with Health & Safety, whose surprisingly solitary stipulation, was that I provide this drinking water. I will elaborate on why we are in this lift later on.

This presentation is called:

I have been looking at The Theatre of the Absurd and would like to consider what aspects of are of sufficient interest to be carried over into my practice. After the following introduction, I will lay out what form this takes, followed by discussion and demonstration of specific features in particular of the playwright Samuel Beckett.

These are Harold Pinter’s words on Samuel Beckett, which read like a eulogy to die for, at the same time as providing a useful character profile.

‘The farther he goes, the more good it does me. I don’t want philosophies, tracts, dogmas creeds, ways out, truths, answers, nothing from the bargain basement.

He is the most courageous, remorseless writer going and the more he grinds my nose in the shit, the more grateful I am to him. He’s not fucking me about, he’s not leading me up any garden path, he’s not slipping me a wink, he’s not flogging me a remedy or a revelation or a basin full of breadcrumbs, he’s not selling me anything I don’t want to buy – he doesn’t give a bollock whether I buy or not – he hasn’t got his hand over his heart. Well, I’ll buy his goods, hook, line and sinker, because he leaves no stone unturned and no maggot lonely. He brings forth a body of beauty. His work is beautiful.’ (1)

This presentation is called A Time and Motion study for two reasons.

Firstly, to allude to the arguably de-humanising but profit-maximising Time and Motion Studies pioneered in the manufacturing industry. (2) This has parallels with Beckett’s portrayal of alienation within the human condition by maximising the impact of the image through an economic use of time and motion, as well as language, characters and props.

Secondly, to make reference to the economy of time required to deliver this Context Unit presentation in 10 minutes, whereby the temptation to deviate from the script and ad-lib may lead to inefficiencies and therefore decreased productivity.

The Theatre of the Absurd was written in 1963 (show) and consists of it’s author, Martin Esslin’s classification of absurdist theatre playwrights. (3) This is one man’s view from a particular time and place, mainly post-second world war Paris. Subsequent editions added yet more male playwrights to the list, mainly from eastern Europe. Female playwrights of the absurd are conspicuous by their absence from this classification.

Esslin elects to look at the absurd through the lens of Albert Camus’ Myth of Sisyphus, written almost 20 years earlier, which explores absurdist philosophy.

The Myth of Sisyphus portrays the figure of the absurd hero, Sisyphus, who incurred the wrath of the Gods and was condemned for eternity to pushing a boulder repeatedly up a hill, only for it to roll down the other side. Camus wants us to think of Sisyphus as being happy with this arrangement. (4) He states that Myths exist for us to pour our imaginations into, which he does as he lays out the mental gymnastics necessary in order to abandon the hope offered by religion and embrace the absurd. This in turn helps the audience to embrace the preposterous situations proposed by absurd theatre, which I will refer to later on.

That was the introduction.

This is the next bit.

I would have loved to have attended the 2nd Samuel Beckett Festival, in Enniskillen, this summer. This jolly sounding festival, ironically entitled Happy Days, was named after one of his most crushingly tragic plays. However, instead, I studied Beckett on Film in a static caravan on the Isle of Anglesey. It became apparent, considering the tin can on wheels arrangement of the caravan, that this was quite a suitable location for studying Beckett. Despite the wheels, there was absolutely no likelihood of the caravan going anywhere, any time soon.

The site specific manner of conducting research has become apparent to me, as a way of thinking around subject matter. Performance artist Andrea Fraser describes the act of research and writing as being part of her art and I am in the process of experimenting with ideas such as these as being integral to mine. (5)

The Krapp’s Last Tape arrangement of my preferred place to situate myself, to work on Contexts, shares the image of Beckett’s solitary figure of actor John Hurt as Krapp, with a K, rifling through research matter under a single light source, in my case the natural light in an otherwise dark, bare Room 517 of the Chatham Building.

These examples of research as practice, as distinct from the more familiar Practice as Research, brings us to the question of why we are in this lift. A unifying theme of Beckett’s work is the issue of movement, or the deprivation of it.

Motion & Onwardness (and in the case of this lift, upwardness and downwardness) in Beckett’s modernist parodying of the Victorian westward course of Empire, (6) was made concrete through characters such as Didi and Gogo in the play, Waiting for Godot. We see them deprived of any vestige of movement, physically and metaphysically. They wait and wait but Godot never arrives, the impression is given that even if he did, he would have only brought disappointment.

In Beckett’s play Endgame, none of the characters have two working limbs, not even the soft toy dog. Everything is out of reach without a struggle. This image of the human condition gives the impression of humanity hovering over the questions of what to do and which way to go. The search for a suitable location to demonstrate this hovering, within Manchester School of Art, resulted in us being in this lift.

I’d like at this point, to introduce Samuel Beckett’s film ‘Breath’ directed by Damien Hirst. This has the camera moving around a floating image, of a platform filled with artfully scattered detritus from the medical profession.

This play is incredibly short, lasting only for the duration of one breath. (press play: https://youtu.be/vw6HWwPEQm8)

This demonstrates another of Beckett’s reigning themes, that of Time, in which Hirst’s Breath, is reduced to a single moment.  Martin Esslin’s view is that ‘The only authentic experience that can be communicated is the single moment in the fullness of its emotional intensity.’ (7)

Keith Allen’s death rattle for this stage production is audibly ungraspable in the strained effort of the single inhalation and exhalation.

The complexity of time, in the sense of it being a man-made, measurable construct, is made into a visual image, for example, with Beckett’s minimal use of objects such as Winnie’s ticking clock in the play Happy Days, as well as props suggesting actions which could bring time to an end, such as the gun, also from Winnie’s bag.

On the condition of absurdity, Camus says ‘This state of mind and the world, strain against each other, without being able to embrace each other.’ (8) This may go some way to explaining why Beckett’s people seem to get stuck, both in time and in Winnie’s case physically, first up to her waist, then up to her neck, in the ground.

Considering absurdism poses questions only answerable by the way individuals choose to live their lives. Camus’ Myth of Sisyphus, hugely paraphrased, asks why would you not take your own life, if you can’t find an adequate reason to live it, and recommends substituting the quantity of experience for the quality, and to live out your adventure within the span of your lifetime. (9) This book is introduced as an essay on comedy. (10) Damian Hirst omitted the birth-cry stipulated in the already brief script for ‘Breath’. He refers to Beckett’s humour in the brevity of the stage directions and joins in the joke by reducing it even further. (11)

Martin Esslin classifies an array of male playwrights as exponents of the Theatre of the Absurd. I’d like to finish with a prayer by an English entry under this classification, playwright NF Simpson, who describes daily life as excruciatingly funny, his words, not mine, in an interview with the Daily Mail (12) – and I’m inclined to agree with him. This prayer can be re-purposed as a statement of the objectives of the Theatre of the Absurd, from his play, A Resounding Tinkle.

Response: Give us light that we may be enlightened.

Prayer: Give us light that, sane, we may attain to a distortion more acceptable than the lunatic’s and call it truth:

Response: That, sane, we may know ourselves, and by knowing ourselves may know what it is we know.

Thank you for listening.

6. Cohn, R; Brater, E Around the absurd: essays on modern and postmodern drama.

11. Souvenir Booklet from the Beckett on Film project. p.27.

Handout given to audience:

An outline of absurdist textual strategies, within a frame of reference we are all currently concerned with.

Contextualising the Theatre of the Absurd in the context of Contexts Unit Learning Outcomes.